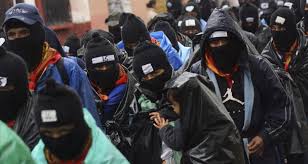 San Cristóbal de Las Casas, Chiapas. With the renewed demand that the San Andrés Accords must be respected and in the midst of a new political era that includes the promotion from lieutenant colonel to subcomandante of the indigenous Tzeltal Moisés,  today marks seventeen years from the signing of the San Andrés Accords by the federal government and the Zapatista Army of National Liberation (EZLN).

For Bishop Felipe Arizmendi Esquivel, the treaties signed on February 16, 1996,

“contain many proposals that should be integrated into our legislation to ensure a decent life for the original peoples” of Mexico.

In an interview, the Bishop added that [the San Andrés Accords]