Speaking out for Lynne 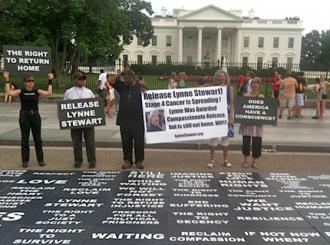 SUPPORTERS OF radical attorney Lynne Stewart are planning a day of protest in Washington, D.C., and beyond on Monday, June 24, to try to win her compassionate release from federal prison so she can be treated for breast cancer.

Stewart’s friends and supporters will gather at noon for a rally and press conference at the Federal Bureau of Prisons (FBP) headquarters at 1st and Indiana, where Stewart’s partner Ralph Poynter, civil rights activist Dick Gregory, former Attorney General Ramsey Clark and others have been holding a vigil for the past week. Afterward, the crowd will march to the White House for another protest on Barack Obama’s doorstep.

Those outside Washington who want to show their support for Stewart are being asked to take time on Monday to call FBP Director Charles E. Samuels Jr…