Arrests in New York City are down 66% amid increasing tensions between police unions and the mayor since two officers were shot and killed on duty. 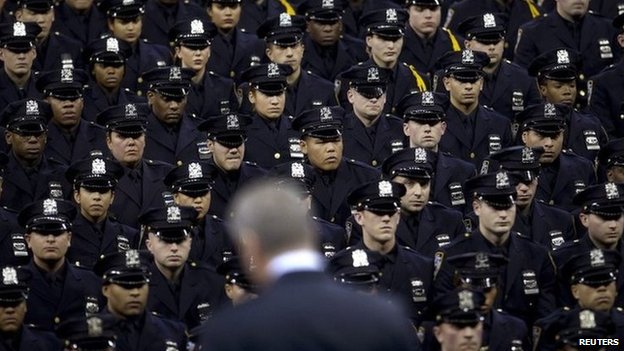 Citations for low-level and traffic offences have dropped by more than 90% compared with the same week a year ago.

The BBC has confirmed the figures, first reported in the New York Post.

On Tuesday, Mayor Bill de Blasio met the city’s police unions who have criticised him for what they see as anti-police rhetoric.

Demonstrators in New York City and across the US have focused on what critics say are brutal police actions against unarmed African Americans this year.

Two particular cases highlighted by the protesters were that of Michael Brown and Eric Garner, killed in police encounters in Ferguson, Missouri, and New York City respectively. Grand juries chose…

← DO YOU HAVE QUESTIONS ABOUT ISRAEL? ~~ HERE ARE THE ANSWERS
‘International Monetary Fund contributed to Ebola epidemic’ →

REVOLUTIONS IN MY SPACE: A BLOG BY RITA BANERJI

"In a time of universal deceit, to tell the truth is an act of revolution." ~ George Orwell