Support Mexico’s People – Not Its Authoritarian And Violent Government

Support Mexico’s People – Not Its Authoritarian And Violent Government 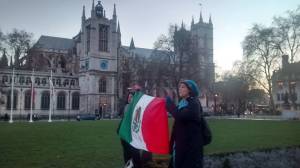 Over the course of only two years in power, Mexico’s President Enrique Pena Nieto has succeeded in turning almost every sector of society against him.

His tax and financial reforms threaten the middle class, his labour reforms promise to further impoverish the working class, his energy reforms will ravage the countryside and drastically reduce fiscal resources and his education reforms have mobilised students and teachers throughout the country.

Meanwhile, the exposure of rampant corruption and conflicts of interest in Nieto’s closest circle, as well as his government’s failure to reverse the public security disaster of aggressive and violent policing inherited from his predecessor Felipe Calderon, have led to a crisis of confidence all the way from top business leaders down to the most humble peasant.