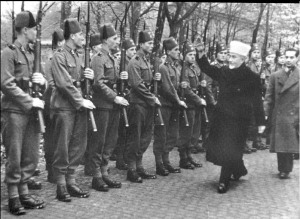 Summary: TheAngryindian speaks extemporaneously on the issue of institutional anti-intellectualism and why is it inherently dangerous to coddle those who bully the general society and targeted groups/populations into accepting their marginalisation as ‘right’ and obedience to their xenophobic, right-wing sociopolitical ideas and utterly paranoid religious fundamentalism. The discourse also includes an examination of Israeli Prime Minister Benjamin Netanyahu’s totally false and misleading statements saying that the original plan for the Nazi programme of genocide, the European Holocaust, started not with Adolf Hitler and his inner circle, but with the then Grand Mufti of Jerusalem, Haj Amin al-Husseini. This is a disgusting historical lie that, ironically, began with the professional historical revisionists on the fringes of the far-right who deny that the fascists carried-out such crimes at all. Unsurprisingly, it is a pet theory within neo-Nazi/Libertarian intellectual circles and the fact that an Israeli PM would dare cite such bollocks as a means of discrediting the Palestinian liberation movement says something about how the professional propagandists judge the public’s consciousness and its sense of political and historical knowledge and comprehension. US Corporatist Donald Trump has taken advantage of anti-intellectualism in his political campaigning to get away with using Nazi imagery, racist anti-immigration rhetoric and now, ‘red-baiting’ against Senator Bernie Sanders and the entire capitalist-owned and operated Democratic National Party (DNC).

EXTRA: Archived audio, ‘From the Rez to Palestine’ (not sure of the source) discussing the historical and political links between North American Indigenous Americans/First Nations peoples and the ongoing independence land struggles and violence going down in Occupied Palestine/Jewish State in the Levant (JSIL).