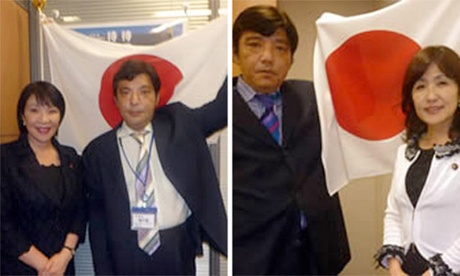 Recently, ministers of the Rightist government in Japan posed for photos with the fuehrer of Japan’s nazi party, everyone smiling.

Still more recently, something similar happened in England, with the violent ‘Britain First’ nazi party, posing for photos with the Ukip party.

Now, something similar in the USA.

By Gabriel Black in the USA:

On Monday, Republican Representative Steven Scalise, the House majority whip and third most powerful GOP member of Congress, confirmed through an advisor that he spoke at a Louisiana conference called by white nationalist and neo-Nazi leaders in 2002. The exposure comes a week after Rep. Michael Grimm (R-NY) pleaded guilty to felony tax fraud and days before the new Republican majority takes control of the House.

Organized by the European-American Unity and Rights Organization (EURO), the 2002 conference was…

← DON’T HOLD YOUR BREATH WAITING FOR THE UN TO GIVE PALESTINE STATEHOOD
URGENT!!! Threats and harassment against the ejidatarios of San Sebastián Bachajón →

"I'm not racist, my wife is Asian!" What will happen when racist, far-right, anti-social, anti-diversity, anti-feminist, anti-black, anti-asian men marry "traditional, family oriented, submissive," extremely racist, abusive asian tiger moms who hope their children look white for privilege - and produce half asian sons who look totally asian, who have to deal with constant racism against asian men? An honest appraisal of self hatred and the frightening sociology of fetishes and their outcome.